The JP20 is a hollow body electric guitar model introduced by Ibanez for 1982. It is a signature model for American jazz guitarist Joe Pass. It was made in Japan initially by FujiGen; production moved to Terada sometime in 1986. The JP20 was the first and only signature guitar made for Pass by Ibanez.

The JP20 features a full-sized, single cutaway, full hollow body design with an arched spruce top with ƒ holes and multi-layer binding on maple back and sides mated to a set-in three-piece maple neck with a 22-fret ebony fingerboard with binding and pearl and abalone split block position markers. Components include a single Ibanez Super 58 humbucking pickup with a gold cover mounted in a black pickup ring between the neck and bridge; a height-adjustable ebony bridge with ebony tailpiece; a bone nut; a tortoise pickguard; Sure Grip knobs; and VelveTune tuning machines with pearloid acrylic buttons.

In late 1982 the Sure Grip II knobs were introduced. For 1983 the standard strap buttons were replaced by the vee-shaped Dead End buttons. For 1985 the Smooth Tuner II machine heads were introduced. For 1987 the Dead End strap buttons were discontinued in favor of standard buttons. For 1988 the tuners were replaced with Gotoh SG38 models.

The relationship between Pass and Ibanez was initiated by Maurice Summerfield of Ibanez's UK distributor CSL. Summerfield also shepherded the JP20's development along with Hoshino USA's Jeff Hasselberger and Hoshino's Fritz Katoh. The guitar debuted in the UK in 1982 and was introduced to the US market shortly thereafter.[1]

The JP20 is modeled off a D'Aquisto 16" archtop which Pass owned. Pass primary design stipulation was a guitar that would accommodate his finger-style playing technique. To that end the JP20 has a 25½" scale and a fretboard with 22 frets instead of the more common 20 fret neck on a typical jazz box. This fretboard change means that the pickup is situated closer to the bridge by 3–4 cm compared to a "typical" jazz guitar like the AF200, which can cause the JP20s electric sound to be a bit thinner.[2]

The serial numbering system for the JP20 differs from the standard system used by FujiGen at the time. The system for these guitars appears to be JYPPPPY, where "J" presumably stands for Joe (Pass), the first and last digit together represent the year of production and the four digits between them are the production sequence for that year. This alternate serial number strategy is not widely known, which means that most JP20 owners (and sellers) believe their guitar were built in October 1980. In fact, no JP20s were produced before 1982. 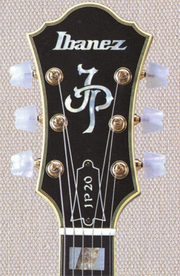 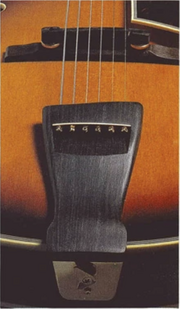 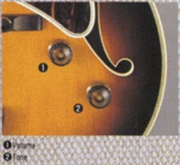