The JEM90HAM is a JEM series solid body electric guitar model introduced by Ibanez in 1998. It was made in Japan by FujiGen as a signature model of American guitarist Steve Vai. It is a limited edition model made in honor of the 90th anniversary of Ibanez's parent company Hoshino Gakki.

The JEM90HAM features an American basswood body with a special textured finish bolted to a maple neck with a 24-fret ebony fingerboard with special position markers at the twelfth and twenty-fourth frets. Components include DiMarzio Evolution pickups mounted in a mirrored pickguard with a pair of humbuckers flanking a single-coil, a Lo-Pro Edge double locking tremolo bridge and Gotoh tuning machines.

The JPM90HAM (John Petrucci), JS90HAM (Joe Satriani) and PGM90HAM (Paul Gilbert) signature models were released along with this one.

The production quantity is believed to be 759 units. It was offered only in 1998. 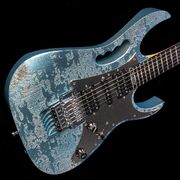 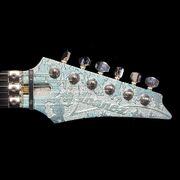