The JEM777L is a left-handed solid body electric guitar model introduced by Ibanez in late-2017. It belongs to the JEM series which is a line of six-string guitars which are signature models for American guitarist Steve Vai. This model is a reissue commemorating 30th anniversary of the release of original JEM777, which was the first JEM; however, no previous left-handed JEM777 was produced. It was produced in Japan by FujiGen.

The JEM777 features a basswood body with special monkey grip cutout and lion's claw tremolo rout bolted to a maple and walnut neck with a 24-fret maple fingerboard with disappearing pyramid position markers. Components include DiMarzio Evolution pickups, an Edge double locking tremolo bridge with a locking nut and a carbon fiber Ultralite arm and Gotoh tuning machines. It is also equipped with a Back Stop tremolo stabilizer.

The reissue has a special engraved 30th anniversary plate at the neck joint, and comes with a hardshell case, a certificate of authenticity in the form of a tour laminate with a lanyard and special picks.

This model was produced in limited numbers, although actual production numbers are as yet unknown. 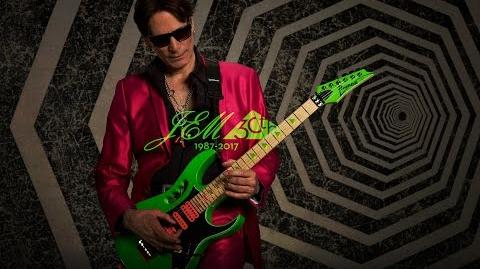