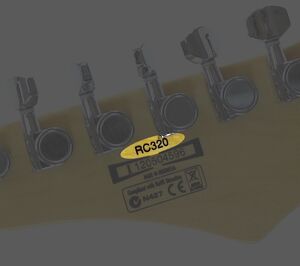 A model number could look like this: RG3520Z where RG is the code for RG series, the specific model number is 3520 and the suffix is Z. Sometimes, for instance in catalogs, the abbreviation defining the model finish is included to the model number, so you would get RG3520Z HBK or even RG3520ZHBK (without the space).

For guitars of recent vintage, the model number is often stamped or painted on the reverse of the instrument's headstock. For earlier instruments, the information in this article along with the serial number can be used to ascertain the model number.

The first one to three letters of a model name generally indicates the series to which that model belongs. The series code usually is an abbreviation of the series name. For the RG series models it's RG and for S series models S. For Steve Vai's signature JEM series the code is JEM and for his Universe series it's UV. Joe Satriani signatures use the JS designation. Most other signature guitars employ a naming convention using the artist's initials followed with an M (presumably standing for Model), for example see Paul Gilbert's PGM line.

In some cases characters are added to the beginning of the model number before the series code. Some cases where this occurs include:

In some cases Ibanez produces spot models which are for sale exclusively by particular retailers in Japan. These models are identified by a prefix on the model number exclusive to each retailer. Some of these retailer codes are:

Occasionally additional characters are appended to the end of the series code, but before the numeric portion of the model number. These characters have specific meanings:

Note that some models may have more than one of these series code suffixes (e.g. RGRT47DX).

For the Iron Label series introduced in 2013, models are given a two character identifier after the series code and before the number. These include:

The specific model number, usually 3 or 4 digits, defines the model and its place within the series. There is a certain system for the model numbers, but it suffers from all kinds of exceptions. The RG series uses this system since 1987. For the S series (including derivatives), it has been fully implemented since 2001, although it already has been used for some models introduced since 1987. Other series that have used this system are the Ergodyne and Talman series

The 100 and 200 series guitars are usually produced in low-wage countries with cheaper components. Most of them now fall within the entry-level GIO line.
Models with four digit numbers (from 1000 and on) now fall within the Prestige range, the higher quality class guitars, usually produced in Japan, although there are some Korea produced Prestige guitars. An exception are numbers starting with 7 (so for instance, the S7320). This 7 indicates that this is a 7-string guitar. Actually these guitars are part of the S7 and RG7 subseries.

Naming strategy for Prestige models from 2014

Starting in 2014 a new naming convention was added for certain models in the Prestige line. These models use three digit numbers where the first (hundreds) digit indicates the number of strings: 6, 7 or 8. The second (tens) digit identifies the quality class (as described above for the hundreds digit in the typical naming system). The final digit identifying the pickup/ pickguard configuration (as described above for the tens digit. These can be thought of as versions of the typical naming convention with the ones digit truncated.

An example of this naming strategy is the RG655, which is a six-string guitar with pickguard-mounted pickups in an HSH configuration. This model is can be considered essentially a direct descendant of the original RG550. One can think of it as the RG655(0).

A new wrinkle to the naming strategy was introduced with the AZ series in 2018. As with other series, the model names start with the series abbreviation (AZ). The next two digits in the AZ model names indicate the number of frets (either 22 or 24). Models in the Prestige line then have a 0 in the third digit. The fourth digit of Prestige models or the third digit of Premium models indicates the pickup configuration using a similar convention as used with other series, as follows:

Finally many models append a suffix to the end consisting of letters that indicate something else about the model (typically the material used for an exotic wood top).

For More about this topic, see List of suffixes used for model names.

In some cases addition characters are appended to the end of the model name, after the numeric model number. Common suffixes include: DX (deluxe), E (EMG pickups), FM (flamed maple top), QM (quilted maple top) and Z (Edge Zero tremolo equipped). A comprehensive list of such suffixes can be found here.

For More about this topic, see List of finishes.

Last but not least, a word about finishes: it is important to know that the color of the guitar is NOT part of the model number. For example the ARZ300 is available in black (ARZ300 BK) and white (ARZ300 WH) but since they both are the same model fundamentally, they share the same model name.

A comprehensive article about finishes is available here.

For a thorough explainer of the topics discussed in this article, check out this video put together by Luc Craven: 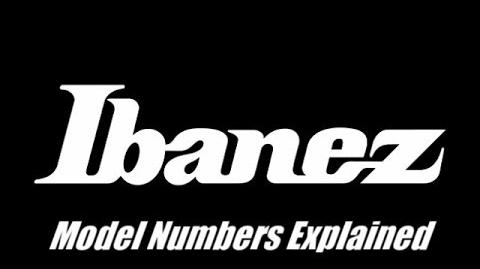