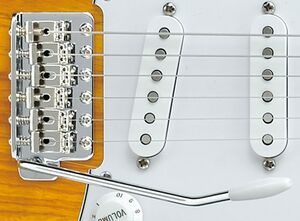 The ITL-PRO is a type of synchronized tremolo bridge designed and produced for Ibanez. It was introduced in late 2015.

The ITL-10 tremolo has six independent bent steel saddles which can be adjusted forward and backward to achieve correct intonation with screws running through the back of the tremolo plate. Additionally, each saddle has a pair of small hex screws at its leading edge which allow the height of the individual strings to be adjusted.

The ITL-PRO is used on a small number of Talman series models in the Prestige line, including the TM1730 and TM1730AHM. The ITL-10 is a similar tremolo used on less expensive Talman models in the standard line. The part number for the tremolo is 2TR00AA001 and it is available only with a chrome finish.