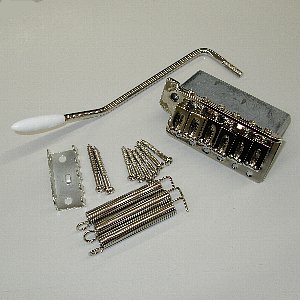 The ITL-10 is a type of synchronized tremolo bridge designed and produced for Ibanez. It was introduced in 2016.

The ITL-10 employs a simple "six-point" design meaning that the tremolo plate is attached to the body with six screws in slightly oversize holes. This design is simpler than the knife edge pivot (e.g. TZ-30, FAT-10, SAT30) or Floyd Rose-style (e.g. Edge, Edge Zero) tremolos seen on higher-end Ibanez models. The FAT-6 is a similar six-point tremolo.

The ITL-10 tremolo has six independent saddles which can be adjusted forward and backward to achieve correct intonation with screws running through the back of the tremolo plate. Additionally, each saddle has a pair of small hex screws at its leading edge which allow the height of the individual strings to be adjusted.

The ITL-PRO is a similar tremolo used on more expensive Talman models in the Prestige line.

The ITL-10 is used on a small number of models in the Talman series including the TM330M and TM330P. The part number for the tremolo is 2TR2JAD001 and it is available only with a chrome finish.

Retrieved from "https://ibanez.fandom.com/wiki/ITL-10?oldid=42730"
Community content is available under CC-BY-SA unless otherwise noted.