The ICJ100WZ is an Iceman series solid body electric guitar model introduced by Ibanez for 1996. It was the signature guitar model of Jay Yuenger, also known simply as "J.", who is best known for his work with American band White Zombie. It is the the only signature model Ibanez made for Yuenger.

The ICJ100WZ is based on the classic "Iceman" shape which was relaunched in 1995. It features a mahogany body with maple top mated to a set-in maple neck with 22-fret bound ebony fingerboard with block inlays. Components include a low profile double locking tremolo bridge and dual Ibanez humbucking pickups with coil split capabilities.

Yuenger has explained that he was attracted to the Iceman guitar not because of Paul Stanley from KISS as many assume, but rather due to Andy Wempler of the hardcore punk band, Necros. A secondary influence was Cheap Trick guitarist Rick Nielsen. Nielsen is pictured with an Iceman on the back cover of Cheap Trick at Budokan, the band's break-through live album, which Yuenger says is the first album he ever purchased.[1]

The ICJ100WZ was discontinued after 1999. It is believed that just 70 were produced each year for a total production run of 280 guitars. 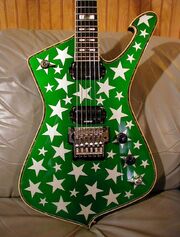 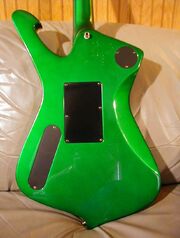