The Hard Rocker Pro tremolo is a guitar bridge developed and manufactured for Ibanez. It debuted in 1983.

The Hard Rocker Pro is a single locking synchronized tremolo. It is a dual point tremolo which pivots against a pair of studs mounted into the top of the guitar. Rather than employing a more typical knife-edge design, the pivot points are rounded. This design is meant to reduce friction wear and provide smoother rocking action. 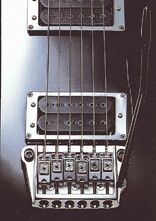 Resting on the baseplate are a set of six individual saddles. These are retained by means of a screw running through the back of the baseplate. This screw can be adjusted to set the intonation by moving the saddle fore and aft. The height of the entire tremolo can by set by raising or lowering the height of the studs; this allows the tremolo to sit on the guitar top or to "float" above it. Additionally the height of each string can be adjusted by raising or lowering a pair of grub screws located in the leading edge of each saddle.

The strings are retained by hooking the ball end in a slot in the leading edge of the bridge and then running the string through the saddle. Each string is clamped down at the saddle with an individual string clamp. These clamps locks the strings into the saddles and contribute to increased tuning stability. These string clamps are the primary difference between this bridge and the Hard Rocker. Both bridges employ a threaded arm.

The Hard Rocker Pro was discontinued on most models in 1984 in favor of the Powerocker Special tremolo, but it made a final appearance in 1985 on the Axstar models. 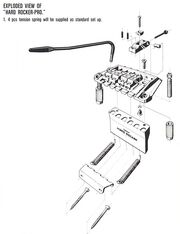 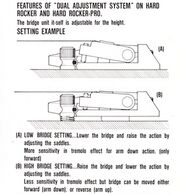 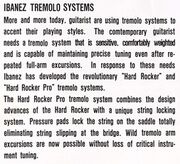