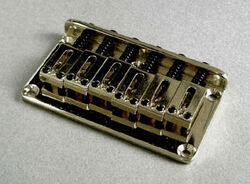 The term hard-tail can refer to a type of guitar bridge or a complete guitar model. A hard-tail is a fixed bridge, usually consisting of a single unit instead of a separate bridge and tailpiece. Strings are usually mounted through-body and run over separate adjustable saddles fixed to the bridge plate. An example of a hard-tail bridge used on Ibanez guitars is the Gotoh GTC101.

A guitar model can be called a hard-tail when it doesn't feature a tremolo system or vibrato tailpiece but a fixed bridge/tailpiece. The term mostly applies to guitars which usually do have a tremolo, such as Fender Stratocaster type guitars and Ibanez RG models and S models. Most of these guitars feature a 'hard-tail' style bridge instead of a tremolo when being 'fixed'.

In Ibanez catalogs the term Fixed Bridge is used for either Ibanez branded hard-tail bridges or the quite similar Gotoh GTC101 bridge.

Retrieved from "https://ibanez.fandom.com/wiki/Hard-tail?oldid=18870"
Community content is available under CC-BY-SA unless otherwise noted.