The Half & half nut is a type of nut featured on some Ibanez guitars.

As its name implies, the half and half nut is a combination of bone and brass. The brass leading edge is meant to provide a more similar tonal quality between open and fretted notes as well as improving sustain, while the bone trailing half reduces the harshness that can sometimes be evidenced in fully brass nuts.

It was introduced in the late 1970s and was used on both solid body and hollow body guitars in that era, including several Artist and Destroyer models and signature models for Paul Stanley and George Benson. It was mostly retired by the mid-1980s, but continues to be used on Benson's flagship GB10 model. 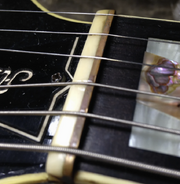 Installed on an AS200

Retrieved from "https://ibanez.fandom.com/wiki/Half_%26_Half_nut?oldid=68381"
Community content is available under CC-BY-SA unless otherwise noted.