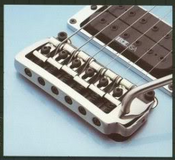 The HQ is a type of non-locking, two-pivot synchronized tremolo bridge sourced on Ibanez guitars. It was introduced in 1988.

The HQ is a non-floating tremolo in the style of a Fender Strat or traditional Wilkinson tremolo. It has a stainless steel plate and saddles and hardened steel knife-edge pivots. It has a low profile to minimize interference with the players hands and a push-in tremolo arm for easy removal. It takes a non-threaded 5mm diameter tremolo arm.

The HQ tremolo is generally used in conjunction with locking tuning machines to enhance tuning stability when the tremolo is used.

The HQ appeared on two Maxxas series guitar models, the MX3 and MX5.

A simpler version of the HQ tremolo was introduced a few years later as the HQ-J tremolo, or HQ Jr.

The HQ tremolo was discontinued after 2000.

Retrieved from "https://ibanez.fandom.com/wiki/HQ_tremolo?oldid=42688"
Community content is available under CC-BY-SA unless otherwise noted.