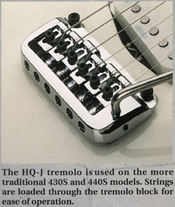 The HQ-J is a type of non-locking, two-pivot synchronized tremolo bridge sourced on Ibanez guitars. It is also known as the HQ-JR, which is a reference to the HQ tremolo which preceded it. It was introduced in 1990.

The HQ-J is a non-locking tremolo in the style of a Fender Strat or traditional Wilkinson tremolo. The strings are loaded through the tremolo block which simplifies the string change process. It has a low profile to minimize interference with the players hands. It is generally used in conjunction with locking tuning machines to enhance tuning stability when the tremolo is used. It takes the same non-threaded 5mm diameter tremolo arm as the earlier HQ trem.

The HQ-J appeared only on a few early S series guitar models including the 430SII and the 440SII, before being discontinued after 1991.

Retrieved from "https://ibanez.fandom.com/wiki/HQ-J_tremolo?oldid=42689"
Community content is available under CC-BY-SA unless otherwise noted.