The Gibraltar tailpiece is a type of stop tailpiece used on a number of hard-tail Ibanez models. It was designed by Ibanez and produced for Ibanez.

Slots in the tailpiece that are perpendicular to it's orientation allow strings to quickly be installed, with their ball end secured in the slot. This method is simpler than a typical stop tailpiece where the strings must be fed through a hole in the tailpiece before being attached to the tuning machines.

The Gibraltar tailpiece relies on a separate bridge which allows the string height and intonation to be adjusted. It is often (though not exclusively) used in conjunction with a Gibraltar Tune-o-matic style bridge.

A scalloped "cloud" ornament accompanies the Gibraltar tailpiece on some models. This ornament sits directly behind and butts against the tailpiece and is attached to the body with three screws. While it is decorative, an increase in sustain is claimed owing to the added mass of the ornament.

The Gibraltar tailpiece was superseded by the Quik Change II tailpiece in 1983. 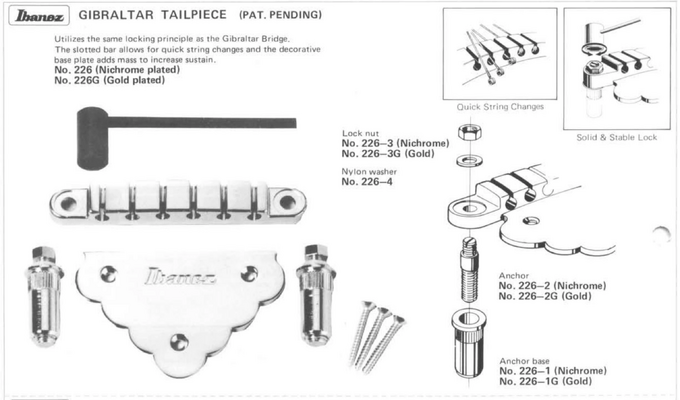