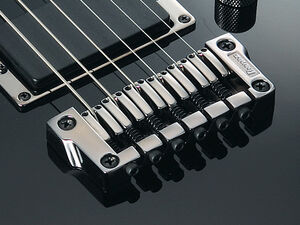 It was introduced for the new non-Japanese made RGA models in 2009; previously only Japanese made RGAs were available with the Gibraltar Plus bridge. It is also used on the RGA-based MBM2 Matt Bachand signature model.

For 2010 use of the Gibraltar Standard bridge has been expanded to other non-Prestige RG models, including the RG321MH, RGR321EX and RGT6EXFX.