The Gibraltar II is a Tune-O-Matic style bridge. It is solely a bridge, meaning that it does not anchor the strings to the body itself. Therefore it must be combined with a separate tailpiece or in a string-through-body setup. It was often paired with a Quik Change II tailpiece. 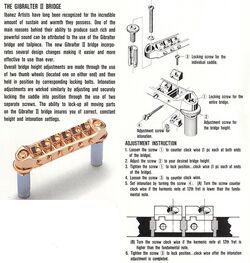 The Gibraltar II is designed for simple use and adjustment. It allows for quick and easy intonation and string height alteration. The overall height of the bridge is adjusted through the use of thumbscrews located on either end of the bridge. Height adjustments are locked by use of locking screws at the top of each post. Saddle adjustments for intonation are made using adjustment screws in the side of the bridge and the saddle position is maintained with lock screws for each individual saddle.

Guitar models with a Gibraltar II include various Artist series models and Artist derivatives (e.g. AX1220) as well as a handful of others. For a full list of models using the Gibraltar II, see here.