The GA3ECE is a GA series classical acoustic/ electric guitar model introduced by Ibanez in 2007. It was made in China. Until 2013 it was a spot model.

The GA3ECE features a classical body with a Venetian cutaway and a laminated spruce top on agathis back and sides with a gloss finish. The soundhole is round with a classical mosaic water slide decal. It has a mahogany neck with a 19-fret rosewood fingerboard. Components include an Ivorex II plastic saddle in a rosewood bridge, an Ivorex II nut, chrome classical tuning machines with pearl buttons and nylon strings. Electronics consist of an Ibanez under saddle pickup running into an AEQ200T preamp with an onboard tuner powered by a 9V battery and a ¼" stereo output.

The GA3 is a similar standard acoustic model without the cutaway. 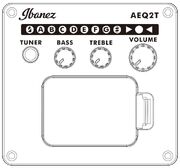