The Fixed Edge III bridge is a locking fixed bridge that is based on the Ibanez Lo-Pro Edge and Edge III tremolo bridges. It is also referred to as the FX Edge III.

The bridge is supported by three stud bolts: one mounted at the rear of the base plate in addition to the two main studs. These studs serve to lock the bridge in place and efficiently transmit string vibration into the body.

The standard version was developed for six-string guitars, but a version is also made for eight-string instruments. This model shares a similar design and is known as the FX Edge III-8 or Fixed Edge III-8. 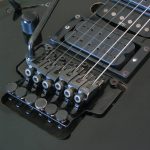