The FRM150 is a Fireman series solid body electric guitar model introduced by Ibanez in 2015. It was produced in China.

The Fireman series is designed with guitarist Paul Gilbert as a signature model. It replaced the FRM100. It was also sold in a package with a gig bag as the FRM150GB.

The FRM150 features a mahogany body bolted to a mahogany and maple neck with a 22-fret rosewood fingerboard with dot position markers. Components include a Tight Tune hard-tail bridge and tailpiece, a TUSQ nut and a pair of DiMarzio Air Classic humbucking pickups flanking an Area '67 single-coil.

Specifications for FRM150
About this table 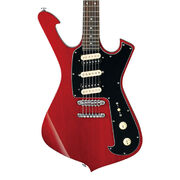