The FRM100 is a solid body electric guitar introduced by Ibanez in late 2011. It was the first mass produced Fireman series guitar, which was designed by Paul Gilbert and is part of Gilbert's signature series. It was produced in China. This model was also sold in a package with a gig bag as the FRM100GB.

The FRM100 was essentially a mass-produced version of the limited edition PGMFRM1. This model came in two colors: transparent red and mustard yellow. The red FRM100 was available worldwide while the yellow one was offered only in the Japanese market.

The FRM100 features a mahogany body with a mahogany and maple set-in neck with a 22-fret rosewood fingerboard with pearl dot position markers. It sports three DiMarzio single coil pickups mounted in a tortoiseshell pickguard, a Tune-o-matic style fixed bridge with tailpiece and a teflon-impregnated Graph Tech TUSQ nut. 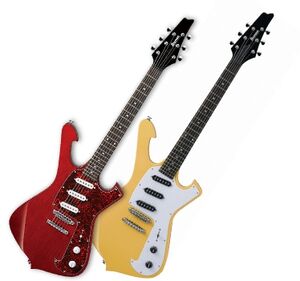 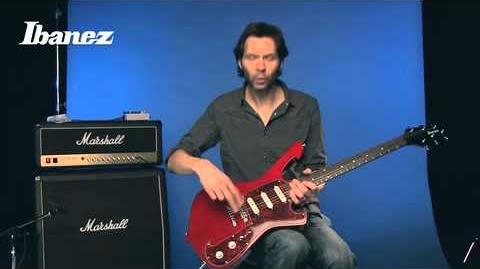 Retrieved from "https://ibanez.fandom.com/wiki/FRM100?oldid=44426"
Community content is available under CC-BY-SA unless otherwise noted.