The Edge Pro II is a double locking tremolo bridge developed and produced for Ibanez. It was introduced in 2003 as the primary tremolo used on mid-tier guitars made outside of Japan. It was produced in Korea.

It is very similar in appearance to the Edge Pro, which was used on higher-end models. The Edge Pro II uses cheaper metals and construction methods and lacks a case-hardened knife edge. It also lacks the "sound chips" in the saddles that are a feature of the Edge Pro. Like the Edge Pro and the other modern Ibanez double locking tremolos, the Edge Pro II is based off designs pioneered by Floyd Rose.

Like the Edge Pro it can be strung either with or without removing the ball ends of the strings. If the ball ends are left on they are retained by clips under the saddle.Another feature the Edge Pro II shares with it's big brother is the lack of string retainer blocks in the saddles. These blocks, which are used on the original Edge as well as the Edge III have a tendency to fall out while one is changing strings.

The Edge Pro II utilizes a push-in tremolo bar, but it has a different design than the Edge Pro and Ibanez's other high-end trems. The arm height is adjusted using a 2mm allen screw accessed via the rear cavity on the underside of the tremolo arm holder. The rotational torque of the bar is adjusted using a 2mm allen screw recessed into the rear of the tremolo body.

The underside of the Edge Pro II uses a traditional design with a cast metal block and a set of three springs which hook to the block and to a claw which is attached to the cavity with a pair of screws. The springs are retained in the block with a block lock bar attached with two screws. The position of the claw can be adjusted to balance the tension of the strings and alter the angle of the trem in the cavity; for best results the tremolo should sit roughly parallel with the guitar top. 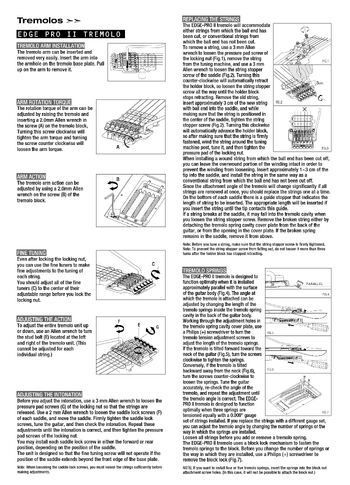 The first Floyd Rose patents expired in 2002, so for 2003 Ibanez unveiled a completely new set of tremolo designs for which they believed they wouldn't have to pay license fees to Rose. It was soon revealed, though, that Rose still held patents to some aspects of the designs of these new tremolos, particular their low-profile form factors. Because of these patents, Ibanez had to continue to pay to license Rose's designs.

The Edge III replaced the Edge Pro II after 2005. The Edge III has a slightly higher profile form and thus it's conceivable that it didn't run afoul of any patents held by Rose and thus wasn't subject to license fees. This may have been a factor in hastening the Edge Pro II's demise after 2005 with only the JS100 version lasting through 2006.

Retrieved from "https://ibanez.fandom.com/wiki/Edge_Pro_II?oldid=43340"
Community content is available under CC-BY-SA unless otherwise noted.