Like the Edge Pro II, the Edge Pro III utilizes a push-in tremolo bar, but it has a different design than the Edge Pro and Ibanez's other high-end trems. The arm height is adjusted using a 1.5mm allen screw accessed via the rear cavity on the underside of the tremolo arm holder. The rotational torque of the bar is adjusted using a 3mm allen screw recessed into the rear of the tremolo body. A special version of the Edge III with a screw-in arm is made for the EGEN8 Herman Li signature guitar. 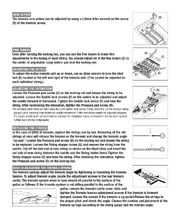