For a list of EX models, see Portal:EX series.

The EX series is a line of solid body electric guitars produced by Hoshino Gakki and sold under the Ibanez brand. The EX series was introduced in 1988.

The EX (short for EXperimental) models were essentially RG-bodied guitars produced in Korea instead of Japan as a more affordable alternative. The guitars featured the RG shape, but with rounded edges, as opposed to the squared edges of the RG line. They presumably were named differently to minimize the potential damage to the reputation of the RG name due to possible quality issues in moving production from Japan, although some markets already did have some Korean made RG models.

They were equipped with Powersound pickups in various configurations, and most had an Ibanez TRS-101 tremolo, licensed by Floyd Rose.

The EX models were replaced by the Ibanez RX series in 1994. That year, Ibanez also started with the production of higher-end Korean RG models like the RG450 and RG470. 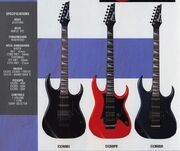 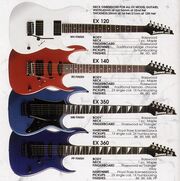 1993
Community content is available under CC-BY-SA unless otherwise noted.
Advertisement