The EGEN18 is a solid body electric guitar model introduced by Ibanez in late 2008. It is a signature model of guitarist Herman Li, known for his work primarily with the British power metal band DragonForce. The EGEN18 is produced in Japan by FujiGen.

The EGEN18 was Li's first signature Ibanez and the first E-Gen series guitar model. It was originally referred to as the EGEN1 but was renamed the following year. It is based on the S series but has a number of model specific features, including the Kung Fu Grip on the upper horn, the extended sculpting on the lower cutaway, and additional switching options.

The EGEN18 features a flamed maple top on a mahogany body bolted to a maple and walnut neck with a 24-fret rosewood fingerboard with abalone oval position markers and scalloping on the top four frets. Components include custom DiMarzio HLM pickups with a pair of humbuckers flanking a single-coil, a special version of the Edge Zero double locking tremolo bridge with gold finish and oversized gold springs and a removable ZPS tuning stabilizer and Gotoh tuning machines.

For 2019 the Macassar ebony replaced rosewood for the fretboard.

The EGEN8 is a more affordable version which was introduced in 2010.

The EGEN series was discontinued after 2019.

The DiMarzio HLM pickups were designed to provide Herman's signature sound, with the interesting feature that the middle pickup has been wound with extremely high output. It was designed this way to allow it to be positioned almost flat against the face of the guitar but still retain balanced output relative to the neck and bridge humbuckers, facilitating easier picking without the risk of hitting the pickup.

The EGEN18 was one of the first guitars to feature the new Edge Zero tremolo system. The EGEN18 has a special version of the Edge Zero with beefier springs than normal. It was also just the second Ibanez S series full production guitar to feature a 24 fret neck, after the introduction of the S5470 also in 2008.

One particularly interesting feature of the EGEN18 was an optional extra that had to be specified by the retailer at the time of ordering — the EGEN18 is the first Ibanez guitar produced since the introduction of the Edge Pro to feature locking studs. Prior to the introduction of this model, locking studs were not available on any Ibanez guitars with tremolo systems other than the original Edge or Lo-Pro Edge. Locking studs have since become a standard feature of all Edge Zero equipped models. 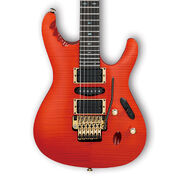 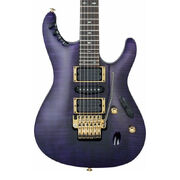 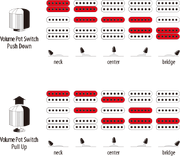