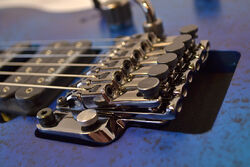 A double locking tremolo is a type of tremolo bridge used in an electric guitar. The concept of a double locking design is that the string is solidly locked at both ends.

The initial double-locking tremolo was developed by a hobbyist guitar player named Floyd D. Rose. Floyd Rose owns the patents on the design, and licenses these patents to several manufacturers.

A double locking tremolo is actually part of a double locking system that consists of a lock at the nut of the guitar, which prevents the tuning heads from being used and holds the strings taut and a "floating bridge", where the other ends of the strings are also vise-locked, hence, "double-locking".

The locking system helps to keep the strings in tune while the strings are slackened to a degree which was not achieved with older tremolo systems, such as those found on Fender Stratocaster, allowing dive bombs, a rapid lowering of the pitch of a note. Since the tuning heads are ineffectual with the lock in place, the Floyd Rose bridge has heads for fine tuning; the guitar is tuned before the lock is put on, then fine tuned afterwards. Each guitar incorporated with a Floyd Rose tremolo system has springs put in the back of the hardware which create balanced forces with the strings, thus keeping the tremolo in a "floating" state.