The AZ2402BWB is an AZ series solid body electric guitar model introduced by Ibanez in late 2019. It was produced in Japan by Fujigen as a limited edition model in the upscale Prestige line. It was offered only in Japan. 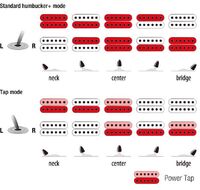 The AZ2402BWB employs a dyna-MIX10 switching system (see diagram at right) with an "Alter switch" toggle which allows the user to access ten distinct tones. The Alter switch appears to tap one coil of the humbucker (as opposed to a traditional coil-split which disables one coil completely) to achieve a sound similar to a single coil without the drop in output which typically accompanies a coil split.

Retrieved from "https://ibanez.fandom.com/wiki/AZ2402BWB?oldid=62264"
Community content is available under CC-BY-SA unless otherwise noted.