The AX75 is an Axstar series headless solid body electric guitar model introduced by Ibanez in 1986. It was made in Japan by Chushin Gakki.[1]

The Axstar series features a headless design with a tailpiece tuning mechanism located on the body behind the bridge rather than on the headstock as in a more conventional design. The guitar's design is credited to Mace Bailey, who was the chief designer at Ibanez's US distributor Hoshino USA in Bensalem, Pennsylvania.[1]

The AX75 has a smallish, offset double-cutaway alder body with a carved maple top mated to a set-in maple neck with a 24-fret ebony fingerboard with dot position markers. Components include Ibanez active Lo-Z pickups with a humbucker at the bridge and single-coils in the neck and middle positions and a fixed bridge. Controls consist of a master volume, a secondary volume for the middle pickup, a high-boost equalizer and a 3-way pickup toggle.

The AX70 is a similar model with a pair of humbuckers.

The AX75 was discontinued after 1986 along with the rest of the Axstar line. 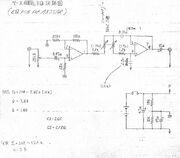 Retrieved from "https://ibanez.fandom.com/wiki/AX75?oldid=48689"
Community content is available under CC-BY-SA unless otherwise noted.