The AX48 is an Axstar series solid body electric guitar model introduced by Ibanez in 1985. It was made in Japan.

The AX48 has a swoopy, pointy, X-style basswood body bolted to a maple neck with a 22-fret rosewood fingerboard with dot position markers. Components include Ibanez pickups with a pair of Axstar humbuckers flanking an Axstar single-coil, an OGE1086TBR tremolo system with a string lock behind the nut and Smooth Tuner II machine heads. The neck and headstock are painted black.

The AX48's middle pickup is controlled via an individual volume control which allows the player to blend the middle pickup with any combination of the neck and/or bridge pickups.

The AX48 was discontinued after 1985 in favor of a new line of headless Axstar models introduced for 1986. 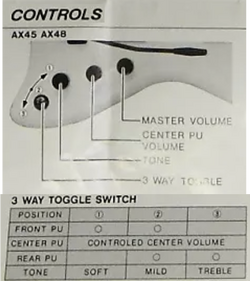