The AX30 is an Axstar series solid body electric guitar model introduced by Ibanez in 1985. It was made in Japan.

The AX30 has a swoopy, pointy, X-style basswood body bolted to a maple neck with a 22-fret rosewood fingerboard with dot position markers. Components include a pair of Ibanez humbucking pickups, a Hard Rocker Pro synchronized tremolo bridge and Smooth Tuner II machine heads. The neck and headstock are painted black.

The AX30 was discontinued after 1985 in favor of a new line of headless Axstar models introduced for 1986. 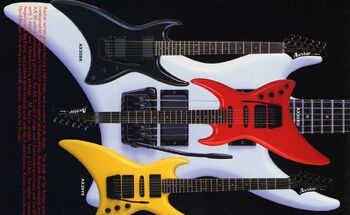