The AT300 is a solid body electric guitar model introduced by Ibanez in 2004. It is a signature model of American guitarist Andy Timmons. It is the third model in the Andy Timmons series, introduced simultaneously the AT200 with which it shares several features.

The AT300 features an SA series arch-topped mahogany body mated to a maple neck with a 22-fret rosewood fingerboard with special inlays. Components include a Wilkinson tremolo bridge and three DiMarzio humbucking pickups. Unlike most other SA models the AT200's input jack is located on the side rather than the front of the guitar.

The AT200 is similar but uses a different bridge and pickups and lacks the unique fretboard inlay.

The AT300 was discontinued after 2007 along with all of the Andy Timmons models. The series returned in 2009 with the AT100CL. 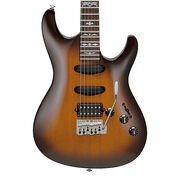