The AR50 (Jr. Series) is an Artist series solid body electric guitar model introduced by Ibanez in 1979. It was made in Japan.

It appears that this was a precursor to the AR50 which is similar but has the pickup selector relocated to the upper horn. The AR30, introduced in 1982, is a similar model with a slightly different control layout.

This version was apparently produced in early 1979, but gave way to the (non-Jr. Series) AR50 by mid year. 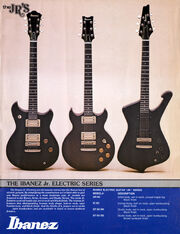