The AR330 is an Artist series solid body electric guitar model introduced by Ibanez in 1982. It was made in Japan by FujiGen and was a spot model which never appeared in a catalog.

The AR330 features a bound dish carved birdseye maple top on a double-cutaway mahogany body mated to a set-in three-piece maple neck with a 22-fret ebony fingerboard with binding and pearl and abalone split block position markers. Components include a pair of Ibanez Super 58 humbucking pickups with individual volume and tone controls, a Tune-o-matic style Gibraltar bridge with embedded sustain block and tailpiece and VelveTune machine heads with pearloid buttons. Each pickup has a Tri-sound switch with three pickup settings: humbucker, single-coil or reverse phase.

The AR300 is a similar regular production model with a flamed maple top. Limited edition finishes of the AR300 in Black and Gold were produced simultaneously with the AR330.[1] It was stated that only 80 examples were produced, but it's unclear whether that meant 80 of each or a total of 80 of all three variants combined. 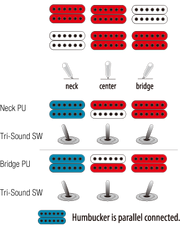