The AR3000 is an Artist series solid body electric guitar model introduced by Ibanez in 1980. It was made in Japan as a limited edition model.

The AR3000 features an arched maple top with ivoroid and abalone binding on a double-cutaway mahogany body mated to a set-in three-piece hard rock maple neck with a 22-fret ebony fingerboard with binding and pearl and Mexican abalone split block position markers. Components include a pair of Ibanez Super 58 humbucking pickups with gold/brass covers, a Gibraltar Tune-O-Matic style fixed bridge and tailpiece with decorative cloud ornament, a half-bone/ half-brass nut, and VelveTune machine heads. The body has a hand-rubbed lacquer finish.

Controls consist of a master volume and tone, a ±6 dB boost knob, 3-band ±15 dB active EQ knobs (bass, middle, treble) and a Tri-sound switch for each pickup. A toggle allows the EQ system to be activated along with an LED indicator.

It was part of the Artist Limited Edition series which began as guitars produced only for industry shows to showcase the pinnacle of Ibanez's capabilities. Response to them was so great that the company decided to put them into limited production.

The AR5000 is a similar Artist Limited Edition model with pearl vine fretboard inlays. The AR500 is a regular production model with similar features.

The AR3000 was discontinued after 1981. The name was revived in 2004, but that later model lacks the Artist EQ electronics. 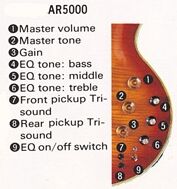