The APEX1 is a seven-string solid body electric guitar model introduced by Ibanez in 2007. It was a signature guitar created for James "Munky" Shaffer, guitarist for the American band Korn, as the initial model in the APEX series. The APEX2 was made in Japan by FujiGen.

Previously Munky shared the K7 Korn signature model with his former bandmate Brian "Head" Welch. The K7 was discontinued in 2006 in favor of the APEX models.

The APEX1 is based on the RG series body shape. It features a mahogany body bolted to a custom maple and wenge neck with a 24-fret rosewood fingerboard with binding and star position markers with the zodiac symbol for Cancer at the 12th fret. Components include dual DiMarzio PAF 7 pickups, and Ibanez double locking tremolo bridge with the special U-bar and Gotoh tuning machines.

For 2010, the Edge Pro 7 bridge was replaced by the Lo Pro Edge 7, when the former was discontinued.

The APEX2 is a related hard-tail model built for a lower price point.

The APEX1 was discontinued upon the release of the APEX100 in 2011.

The U-bar is an alternative for the standard tremolo arm. It lets you palm the bridge to get tremolo effects without touching the fine tuners. The APEX1 has a specially modified Edge Pro 7 tremolo to accommodate the U-bar but also can be used with a standard arm for traditional set-up. 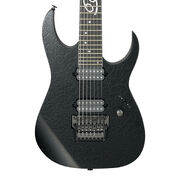