The AM205 is a hollow body electric guitar model introduced by Ibanez for 1982. It was made in Japan by FujiGen as part of the Artist series. Late in this model's run the line was renamed the Artstar series.

The AM205 features a compact, semi-hollow, double cutaway body design with an arched, burl mahogany top with ƒ holes and ivory multi-binding on burl mahogany back and sides with a maple center block mated to a set-in mahogany neck with a 22-fret ebony fingerboard with ivory binding and pearl and abalone split block position markers. Components include a pair of Ibanez Super 58 humbucking pickups with gold covers and individual volume and tone controls, ivory plastic pickup rings, a Tune-o-matic style Gibraltar II bridge, a Quik Change II tailpiece, a bone nut, a black pickguard, Sure Grip II knobs, and VelveTune tuning machines.

For 1983 the VelveTune II machine heads were introduced. For 1985 the tuners were changed to the new Smooth Tuner.

This version of the AM205 was discontinued after 1987 and replaced by the very similar AM200. A new model with the same name was introduced in 2014. 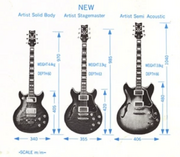