The AFR5FMP is a five string Affirma series solid body electric bass model introduced by Ibanez for 2019. It is a limited model made in Indonesia as part of the mid-tier Premium line. It heralds the return of the Affirma series which had a short run between 1992 and 1995.

The AFR5FMP features half through neck construction with a flamed maple and walnut top on a maple body attached to a graphite reinforced maple neck with a 24-fret ebony fingerboard with offset abalone dot position markers at the twelfth fret. The body has a sculpted, asymmetrical double cutaway design originated by Rolf Spuler with distinctive, narrow, curving horns; the AFR logo is inlaid into the guitar top between the pickup and bridge. Components include a single Bartolini X55JX split single-coil pickup mounted halfway between the bridge and neck, an Ibanez two-band EQ w/ piezo active tone control, stainless steel frets, a Mono-rail V bridge with integrated AeroSilk piezos and 19mm string spacing, a barrel-style stereo output jack, a plastic nut and Ibanez tuning machines.

The AFR4FMP is a four string version. The AFR5WAP is a similar model with a walnut body. 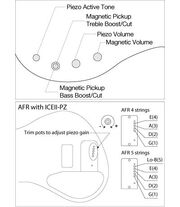 Retrieved from "https://ibanez.fandom.com/wiki/AFR5FMP?oldid=61450"
Community content is available under CC-BY-SA unless otherwise noted.