The AEG10LII is a left-handed AEG series acoustic/ electric guitar model introduced by Ibanez in late 2013. It was produced in China.

The AEG10LII features a thinner grand concert shaped body with a soft Venetian cutaway. The top is laminated spruce with ivory binding on mahogany back and sides with a high gloss finish. The round soundhole has an abalone rosette. It has a satin-finish mahogany neck with a 25" scale, 21-fret rosewood fingerboard with small white dot position markers. Components include a plastic saddle in a rosewood bridge, Ibanez Advantage bridge pins, a plastic nut, and chrome Ibanez die-cast tuning machines with half moon buttons. Electronics consist of a Fishman Sonicore pickup connected to an Ibanez AEQ-SP1 preamp with onboard tuner powered by a 9V battery and ¼" stereo output jack.

For 2019 the top, back and sides were changed from mahogany to sapele; the rosewood fretboard and bridge were replaced with laurel or balsamo wood; and the mahogany neck was replaced with nyatoh.

The AEG10II is a right-handed version.

The AEG10LII was discontinued after 2019. 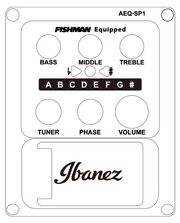 Retrieved from "https://ibanez.fandom.com/wiki/AEG10LII?oldid=62207"
Community content is available under CC-BY-SA unless otherwise noted.