The 2670RE is an Artist series 12-string/ 6-string double neck solid body electric guitar model introduced in 2006. It was a reissue of the classic Ibanez 2670 produced from 1975 thru 1980, which was also known at the Artwood Twin. The 2670RE was crafted in Japan by Sugi.

The 2670RE was recreated using the original blueprints and specifications. The only specification changed from the original is that the Super 70 pickups have been replaced with Super 58 pickups. The 2670RE is based on the initial 2670 model from '75–'77 with the "spaghetti" Ibanez logo on the headstock and pickup covers.

Only 45 of these reissues were made and each example was numbered.

Specifications for 2670RE
About this table
Portal: Professional series | Guitar models 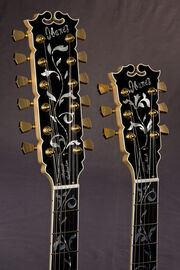