The 2469 is a solid body electric guitar model introduced by Ibanez in 1975. It was made in Japan by FujiGen. This idiosyncratic body shape is known as the Futura.

The 2469 features a swoopy, pointy body modeled on the Gibson Moderne design. This may be the first Moderne-style guitar put into production, since it's never been firmly established that Gibson's design from the 1950s was produced; it was certainly the first to be produced in significant numbers.

This guitar is part of the legendary Korina Trio along with the 2459 "Korina Destroyer" and the 2387CT "Rocket Roll Sr."[1] which were copies of Gibson's trio of "modernistic" designs from the 1950s. While those earlier Gibson guitars were made of African limba wood (also known as korina), the exact species of wood used for the Ibanez trio has been much debated — the catalogs say "solid ash", some marketing materials claimed they were "African korina" and some experts insist they were made of Japanese sen, which has a grain structure similar to ash. In any event the translucent "African Korina" finish gave them a yellowish hue which was quite similar to Gibson's originals.[2]

The 2469 was discontinued in 1977 as Ibanez was phasing out production of copies of guitars from other manufacturers in favor of their own designs.

Specifications for 2469
About this table
Portal: Guitar models 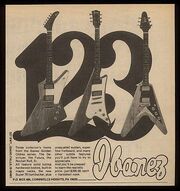 Magazine ad for the "Korina Trio"