The 2387 is a solid body electric guitar model introduced by Ibanez for 1972. It was made in Japan by FujiGen. It was among the first models in what would come to be the Rocket Roll series. It was also referred to as the Super V[1], the Rocket-Style and the Rocket-Roll.[2]

The 2387 features a vee-shaped body modeled on the Gibson Flying V. It has a solid mahogany body bolted to a mahogany neck with a 22-fret rosewood fingerboard with pearloid dot position markers. Components include a Tune-o-matic style fixed bridge and stop tailpiece, a pair of uncovered Ibanez humbucking pickups mounted in a large white pickguard which covers much of the top, top hat style knobs, and covered tuners. The output jack is mounted on the face of the guitar.

The 2387DX is a similar model with a set-in neck and sealed tuners. The 2387B is a four-string bass model with similar styling.

The 2387 and 2387DX were initially offered only in the United Kingdom. They were created at the behest of UK distributor Maurice Summerfield who bought an early 70's Gibson Flying V reissue and sent it to Hoshino in Japan to be reverse engineered.[2] They were introduced to the US market in 1974.[3] 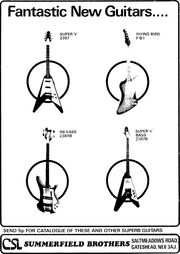