Yeah, that's a very unusual one. I'm not aware of any production model that had exactly that control layout. The closest model would be the AR500, but I'd expect to see a third Sure Grip knob (for Gain) as well as two small Tri-sound switches near the EQ toggle.

Of the models you mentioned, the possibility I can eliminate is the AR300 as every AR300 version I've seen has passive pickups (and so no battery nor any of the black control knobs).

So, the possibilities I can see are these: this is some spot model that was never featured in a catalog, it's some sort of prototype or guitar custom-built by Ibanez, it's been modified by someone along the way, or it's a "fake" or "tribute" not made by Ibanez. The modification explanation doesn't seem likely as there isn't any sign of any controls being added or deleted.

Does the headstock have a serial number stamped or printed on it? That would tell us when the guitar was built which might give us some clue on the rest.

(edited by Deejayk)
0
Wow, thanks for your help! The closest guess I had was a at 400 factory prototype - I think it dates from the early 80’s so twould that make sense? Its def active as it sounds absolutely awful when the battery is running flat and there is quite a volume difference between active and passive modes. It needs new strings and a once over from a guitar technician to get it back into playing condition!

Yes serial no. On headstock - looks to all intents like an Ibanez original - see additional pics 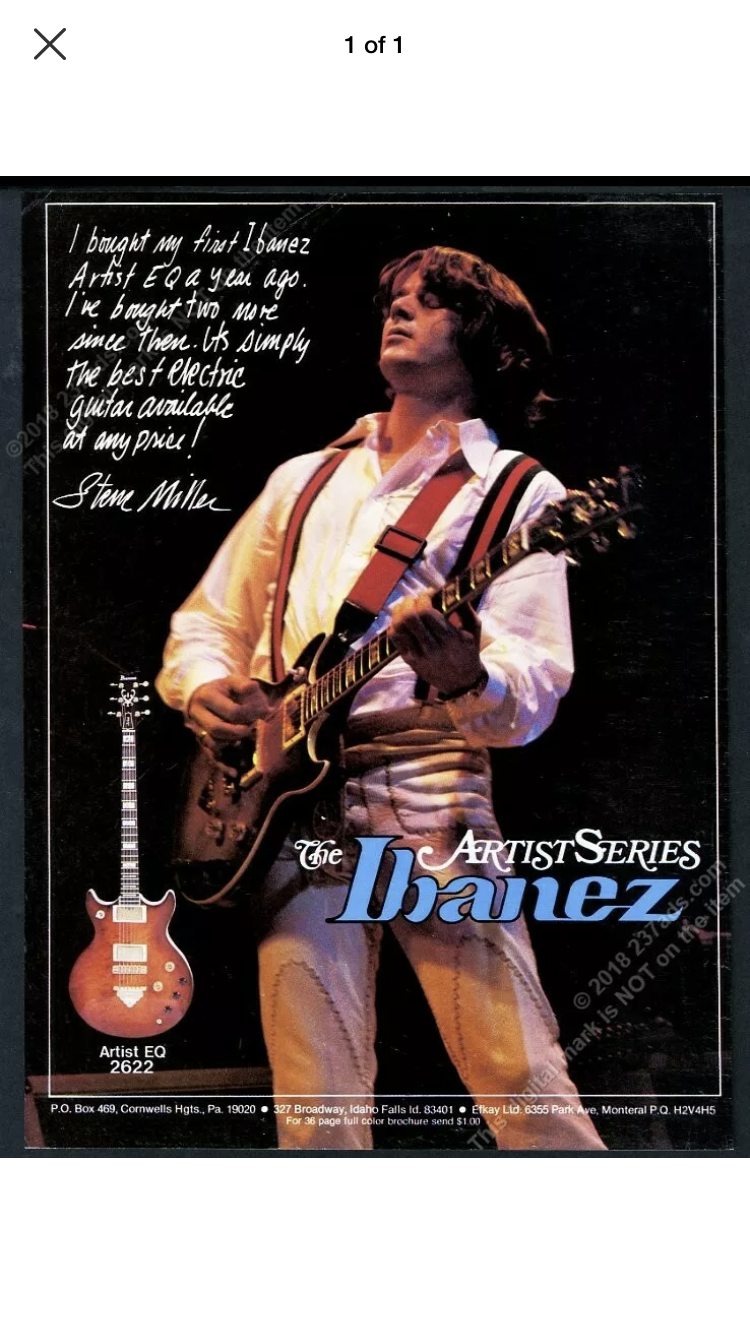 I’ve just found one for sale in the US also -

Selling at $1600! I was going to list mine on eBay but I might see if any collectors want it first.

There you go! The serial number indicates yours is made in March of 1979, and I'm pretty sure you're right on the ID as a Steve Miller model. I haven't gotten quite that far back in the catalog with the wiki, so I'm not as familiar with that one as with the models from a couple years later.

I'd say it's almost certainly an original — everything looks right as far as I can see. These older Artists in good condition regular sell for around US$1500 or a bit more if they're really nice or you find someone who just has to have it.

If you're considering selling it, be sure to visit the Ibanez Collector's World forum. There are a lot of guys on there who are into these older Artists. I haven't played one of these deluxe models with the active pickups, but I recently picked up an AR2619 which is essentially a reissue of the old AR300. I'm really loving mine.

What do you think?